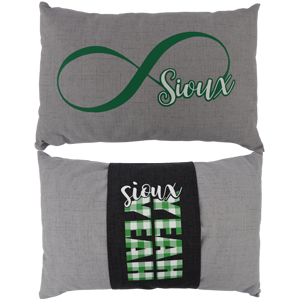 This addition to our Amazing PilloWraP line is the ultimate “Fan Cave Upgrade!”

The pillow cover has our signature “envelope back” with no zippers to break.   The wrap is tailored to snugly fit the pillow – no messy Velcro or buttons to mess with.

Simply display the pillow as is, and when you want a different look, turn the pillow over and slip on the wrap.

This pillow cover is light gray in color and has our exclusive “Sioux Forever” infinity symbol displayed on the front in a Kelly green and white.  The cover measures approximately 11″ x 16″ and has been pre-washed and pre-shrunk.

The wrap is dark charcoal in color and has “Sioux Yeah Yeah” displayed on the front in a Kelly green and white design.  It measures about 11″ high x 6″ wide.

The form that comes inserted into your pillow cover is 100% hypoallergenic.  It measures slightly larger than the cover to give it an “extra plum” fit.

Complete care and use instructions are included with this product.

This item is in-stock & ready to ship!

Depending on the amount of orders we have to process, your order will ship in 1 – 3 business days.  USPS tracking will be provided.